Was not expecting an ALLBLACK/Cash Kidd collaboration but on second thought perhaps I should not have been that surprised to see them joining forces, they’re both sort of the supremely talented wildcards/jokers in the deck of their respective Bay area/Detroit scenes. When I first read the title I thought it said ‘DaBaby’ instead of ‘DaBoii’ which would have made for an even wilder combination. ALLBLACK and Cash Kidd just stomp all over this crunchy production. It would probably be too much to ask but would be interesting to get a joint mixtape from these two.

Could any other rapper besides ALLBLACK pull off the line “Always been a piece of shit, used to piss in the tub?” (Used to drink a 4 Loko and then ride through the Dubs) Especially as the opening line for a song? Lol.

“I’m finna cut my hair and change my name to DMX… paranoid as fuck I’m in the window like I’m Malcom X… in the Gucci store got white hos breaking their necks” ALLBLACK definitley has some DMX in his game and I would not be opposed to seeing him embrace that angle further.

This hook goes super hard; it may be the first time I’ve heard Scottsdale mentioned in a rap song, and the eating addicts back to back part is fire. I was wondering where the ‘pizza rolls’ in the title would come from and here we are.

CLEATS ON, JOGGERS ON, GLOCKY ON, SCOTTSDALE UP TO PORTLAND I GOT IT SOLD, FOUR TOURS IN ONE YEAR, I’M NEVER HOME, EATING ADDICTS BACK TO BACK LIKE THEY PIZZA ROLLS

Cash Kidd just swoops in at the end like a bat out of hell. I love the ‘Cameras on the front and back who you creeping on?” and “The opps soft I don’t know how their bitches feel safe with them” lines

ALLBACK is the best. He’s like Oakland’s Dos Equis guy; the most interesting man in rap.

I don’t know who Kossisko is but since ALLBLACK is rocking with him I’m obligated to blindly be down with him, and he glided on the hook here. This beat is wild too but I don’t know who produced it. ALLBLACK looking burly out here with the windbreaker and the taped up wrists. I’m loving the theme and format of the video which made 304 even more fun and took things back to a simpler time. ALLBLACK knows how to make function music; I have a feeling my man the Martorialist is going to love this one if he hasn’t seen it already. We’ve been blessed with a nice feast of fun songs/videos lately and 304 is definitely worthy of that company if not at the top of it.

ALLBLACK is coming out firing with verse of the year material, “Can’t trust hoes, barely can trust my partners. In a Sprinter with 3 Glocks and a mint green chopper. My Cambodian niggas blacker than Barrack Obama. My migo niggas knock the meat out up your enchilada… Y’all know me I just walked down here for carne asada, sour cream extra cheese and a large horchata… Same nigga from the group home drinking UV vodka.”

I love the ‘Pull up whenever wherever like Kerr from the Bulls, stole my granddad’s revolver and took it to school’ line because when you hear it you either think of ALLBLACK or an angry, goth-y suburban teenager. (See ALLBLACK’s verse on Road Run, he seems to be well aware of this dichotomy.) “Had an all black AP that held 32, I’ve been turned up since AIM this fame ain’t new.”

I’ve been rocking with ALLBLACK since Florida Gator last summer, and I’m glad to see he’s gotten bigger and bigger since then, and hopefully this song/video propels him into an even higher stratosphere.

P.S. here’s what I wrote at the time after I first checked out Lav and posted about it as a young blogger still trying to come up in the blog game, not as bad as I thought…

“As a Mozzy fan I almost felt a bit sneaky and slimey deciding to check out Lavish D’s last couple of mixtapes but much like a cheating spouse eventually the curisoity and temptation got the better of me and I decided to delve into it. He has some pretty good songs and my favorite of all of them was last year’s ‘Iraq’…You’ve also got to tip your hat to any video where the actual rapper isn’t in the video because he’s behind bars so everyone is wearing shirts saying ‘Free Cash Money Lavish’ on them. After listening to a couple of mixtapes I would say that Mozzy has a bit more star power than Lavish D but Lavish D certainly isn’t just a neighborhood rapper looking to get famous by dissing Mozzy, he has a bit of star power and quite a few good songs in his own right. My other favorite by him so far is ‘Speak My Mind‘. Now that he is free I’m going to keep an eye out for his new material as it comes out.”

Saw this one on Ray Garraty a couple weeks back. I remember seeing this guy in those Thizzler end of the year cypher videos too. This beat is so crunchy and ALLBLACK’s homie acquits himself nicely here. “Knock a nigga’s lights out like I’m Tyson, ten niggas ten straps we ain’t fighting.” I love the look on his face and the dismissive wave of the hand when he informs you that ‘we ain’t fighting’. I’m always down for an ALLBLACK cameo in a video and here he’s styling in that black Chris Webber jersey. Would it be too bold of a claim to say Offset Jim > Offset from Migos at this point in time?

It’s only right that ALLBLACK and E-40 would finally link up; two off-kilter flowing Bay Area P’s from overlapping but different eras with their own eccentric senses of humor. Even better that these kindred spirits are spitting over this monstrous Bay beat from Sho Nuff. This beat is nasty I can’t wait to put this on full blast in the whip. Add in a verse from the always-reliable Chippass and you’ve got a perfect Tres Amigos track. ALLBLACK is one of the best out right now. You’ve got to love the fact that he’s one of the hottest names in the game but he’s still grateful on every song still humbly thanking everyone for fucking with him. For every E-40 line nowadays that makes you say, “come on E-40” he has a simple but dope line like “If I go broke I’m selling the car that I’m driving” or “If you jump ship there ain’t no getting back on my boat.” ALLBLACK’s whole verse is filthy as you’d come to expect at this point.

P.S. Ray Garraty put together a nice compilation of ALLBLACK loosies over the weekend 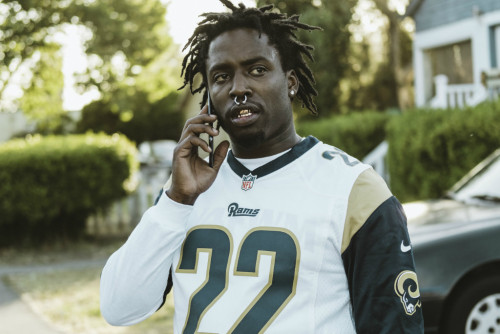 Here ye here ye, your host is hereby temporarily abstaining from the Martorialist-issued embargo on listening to rappers with septum piercings, which as you know, I usually strictly adhere to as they are wise words to live by, but ALLBLACK has me breaking the embargo. (Plus, ALLBLACK actually looks pretty badass with his, unlike some rappers who get them and just end up looking like bratty kids that hang out at Hot Topic.). I originally came here for 03 Greedo’s chorus but left as a new fan of Oakland’s rose-gold-grilled ALLBLACK. (I’m definitely feeling this rose gold grill).

ALLBLACK is certainly a character, and he links up with another big personality here in 03 Greedo in this ode to Florida Gators of an entirely different nature (and nothing to do with Tim Tebow or Aaron Hernandez). ALLBLACK mixes that old school, Oakland/Bay Area attitude with the newer vibe of these Soundcloud era type guys that dress like punk rockers. I fucking love what he’s saying here in his verse… “Y’all want ALLBLACK to be like James Stacy, wouldn’t stop running if the doctor amputated my legs… grinding like Chris Cole cause I gotta keep Maxine fed… take the pedals off the bike and I’ma hop on the pegs”. (By the way I feel like Chris Cole and James Stacy are two of the most random/unexpected references ever in a rap song and here they are basically in the same line). ALLBLACK’s verse and whole flow/vibe have grown on me very quickly and now I’m blasting his verse all the time. His song Canadian Goose is a flamer as well.

Could Greedo’s hook here possibly be any more flammable? 03 Greedo on auto tune is on a whole different level. God Level perhaps? It’s just a short cameo from him here on the hook and no verse but it sounds heavenly. My only complaint is I wish they looped it in a couple more times at the end or something.

ALLBLACK is definitely adding his own spin and style to the Bay and really out of nowhere is turning into one of my new/recent favorites and this and Canadian Goose are turning into two of my most heavily-played songs of this young summer so far. I’m also just starting to delve into the new Greedo album ‘God Level’ which I’m only halfway done with but looks like it’s going to have at least a half-dozen bangers on it. FREE GREEDO!

An intense and heartfelt song by East Oakland’s Cookie Money about the death of his father. You can really feel both the sense of sadness and loss as well as the feeling of resolute determination to carry on the family legacy and shouldering the burden of making sure that the rest of his family is straight no matter what it takes. You can really feel where he’s coming from with the unique mix of angry defiance and deep sadness that’s hard to describe. Apparently his father was a serious hustler during the crack epidemic of the 1980s and then spent a lot of time in prison but he and Cook remained very close. I usually don’t watch Vlad TV that frequently but the Cookie Money interview on it was pretty good and delved more into Cookie Money’s background/life story etc it’s long but I would definitely recommend it.  It seems like he’s lost a lot of people close to him recently over the last few months from his dad to his grandmother to some of his homies so hopefully he can find some peace and things get better for him soon.

I don’t think Cookie is doing anything crazy lyrically but he’s a real, genuine artist who can really make you feel what he’s saying, which makes it even more impressive. He’s not doing it with crazy wordplay or rhyme schemes he’s just doing this with pure heart.

“My daddy died last week bruh this shit hurt. I never thought he’d be the one who had to leave first. I gotta hold my brother down I gotta take the torch, show these niggas what this East Oakland shit is worth.”

“Ready to kill any pussy nigga that look at me wrong. Broad day, no mask, whole clip to his dome. I would never question God I can’t say that he wrong, you were more than my father bruh it’s hard to move on. How the fuck you tell (???) that her Papa is gone, I hear your voice late night ‘Lil nigga be strong, same name do your thing keep the legacy going’, I lost my best friend bruh y’all didn’t even know him.”

The real respect for your teacher is your actions when they are gon, not just when you are in their presence. Either you gon live off of ‘em or through ‘em, the choice is yours. Pops you can rest comfortably, you already know what’s wit me #ALJR 🍪💰💪🏾 @shynejewelers #RIPPOPS #RIPMESHAWN #RIPB #cookieworld21/2-10-27-17 #cookiemoney #cookiemoneydalabel #icaughtadream #richb4rap #rapmoney #realEastOakland