“PC Tweezie opens strong and makes his presence felt right away, pummeling the opening verse, “I was really in the trenches with them wolves, I really tote a .30 hit the gas if I get pulled. I’ll really beat your ass run up on you like a bull, I’m really getting fat them hos say I’m getting full.” I love everything about this verse –  The hit the gas if I get pulled line just sounds badass AF, while in the days of rappers talking about their nose rings and desinger messenger bags it just feels refreshing to hear PC Tweezie rap about doling out a good old-fashioned beating and literally taking food off of other inmate’s plates. Lastly, I definitely respect that his hos are admiring his weight gain, because usually when I put on some extra pounds I end up just getting fat-shamed into jogging so he definitely has some serious clout.

In possibly my favorite rhyme of ‘extension’ and ‘extension’ ever, Tweezie deftly deploys it in two different usages and some pretty evocative imagery that shows he’s absolutely not fucking around: “I really keep a 40 glock that came with the extensions, I’m quick to bat a bitch and drag a ho by the extensions.” (Made even better by the ‘I’m silly’ ad lib right after).”

A big added bonus here is the headlines on the newspaper graphics in the video i.e. “Tensions Rise in Local Prison” with the byline “PC’s First Day in Lockup Didn’t Go So Well for the Other Inmates”

“Like Kodak Black, who combines new-gen meme literacy with older rap styles, Ballgreezy stands between movements but remains outside them, continuing in a post-jook mode while softening its Dionysian edges with grown-man world-weariness. At times he resembles one of the mournful songmen of today; this might be the case, and yet Greezy was crooning before Wayne and Kanye broke down the R&B doors and liberated moping for the kids of today.”

Ball Greezy kills it with a heavy but resilient verse, half rapping, half singing…

“Niggas wonder why Greezy don’t smile… I’ve been through the ups and downs, the back and forths the round and rounds. A real food stamp baby, born and raised in Little Haiti, I can’t lie the streets ain’t been the same lately. Niggas don’t keep it G no more, see they don’t make ’em like me no more. Red and blue lights behind me, where the heat gon go? Surrender or shoot it out? I heard they don’t care about you and I. I’m tired of even living like this. How the hell do you raise kids like this.

“They told me that I would never ever be shit, now my watch and my chain make them seasick”

“For whatever reason, I have to admit I’ve been sleeping on Que and have never really gotten into him/checked out much of his stuff. I guess I had heard OG Bobby Johnson back in the day and wasn’t super into it/didn’t see what all the hype was about and then kind of forgot about him. But let me be the first to say, I’ll be DAMNED if his Class Clown EP isn’t a great project with some nice slaps on it. Paramount amongst these was ’90s Baby’ which I’ve been playing over and over again all month. “I’m a ’90s baby, I keep a little .380, it’s hard to tell it’s on me, that boy thought I was naked,’ Que warns potential foes who may be debating whether or not to run up on him.  Even when he’s by himself he’s never lonely because he has his little .380 with him. Delving deeper I’m not sure what being born in the 90s has to do with keeping a hidden .380 but either way I love this song. ‘He got beside himself, and got to talking reckless, he must not got the memo that me and my niggas PETTY!’ Que continues. As one of the pettiest people you’ll ever meet, I can definitely get behind this type of message.

END_OF_DOCUMENT_TOKEN_TO_BE_REPLACED

With all the crazy stuff going on out here in the world lately, sometimes it feels good to reminisce about a simpler, more carefree time, for example, by taking a trip down memory lane with Key Loom, who affably leads us on a guided tour of his hood in those golden days of youth where you could “give a knock a rock for a book of food stamps.”

Key Loom really sets the aesthetic in his dope 2016 song ‘Succa Free’; “Back then, orange juice with the old E, on the turf soaking game from the OG’s”. Everything from the picture he paints with the verses and the scene he sets to the infectious chorus are top notch; this song isn’t new but I’ve probably listened to it about 30 times this week.

Another notable moment is Key Loom staking his claim to being the “flyest gang bang nigga that you’ve ever seen.” In most of the videos I’ve seen, Key Loom seems to favor more of a sensible, utilitarian fashion such as Dickies and plain t shirts and perhaps a winter hat (not to mention the obligatory blue bandana),  as opposed to some of the more daring “fly” designer gear favored by many of the younger rappers, but hey I have no reason to dispute his claim to that title. For example, see below for a quintessential Key Loom look…

(*Side note, I feel like this is a pretty underrated album cover/artwork) 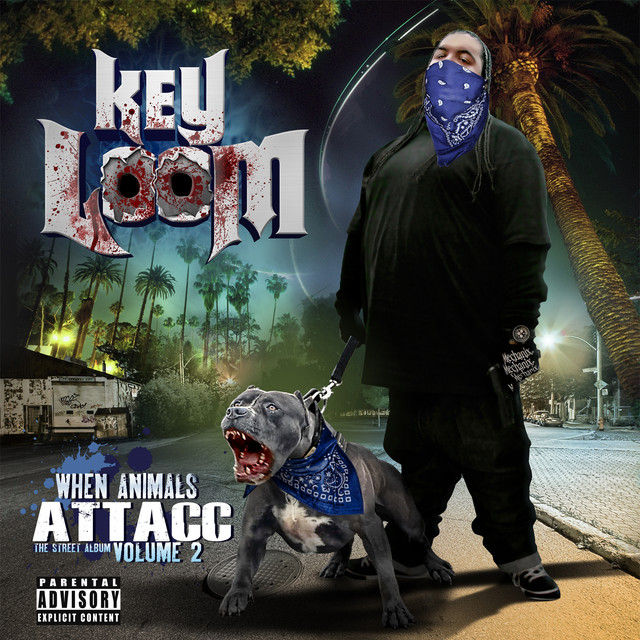 There are a bunch of other standout lines like…

“From the era of the D-boys, with a closet full of Air Maxes, in the trap counting stacks on an air mattress”.

“Burner glove* full of gun shot residue, stay ready what you bitch niggas better do, couple holes in my body but I’m still stepping, thank God every day that’s a real blessing. Still keep my eyes peeled ’cause I’m on shit, fuck them suckas if they throwing up the wrong set”.

P.S. – Can we get a Berner/Key Loom collaboration album??