It’s Sunday so not to sound like a televangelist but I’m about to dress like an old-timey, fast-talking frontier town preacher (a la Sauce in the artwork for this single) and hit y’all with a little with a little gospel, the Ghetto Gospel that is. This is Sauce Walka at his downright, well, sauciest. Spitting some real knowledge/life experience over a shimmery beat apparently from Kingdom Hearts (and French Montana). I can’t blame him for having his mind on boudan; and all this talk of boudan has got me feeling like Kevin Belton. It’s too early to say but definitley could be in the mix for a song of the year contender for me. 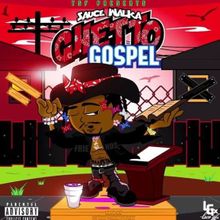 This came out so dope with that heavenly Stan Getz sax sample and the way H-Town’s DJ Mr Rogers cut  it up. I played the part in the middle where he’s working on the beat over and over again, it was so relaxing and hypnotic to watch/listen to. The ’25 Lighters’ and ‘I Get Money’ snippets he added in were nice touches too. Would love to see this turn into an actual song on an official release from Le$. Mr. Rogers really worked his magic on this one.

20 years later and The Leprechaun has still got it!

It takes a minute or so to get going but once Lil Flip hits his stride he burns down this freestyle over the G-Eazy ‘No Limit’ beat, which is awesome, because the beat isn’t bad but I can’t stand the actual song or most of the artists on it. Just replace them all with Lil Flip and the chorus to Bay Bay marching in place yelling ‘Rock with us and get some money’ like in the video. Side note – I love how hyped up BayBay gets for this freestyle, and his antics that go along with it like acting like he’s riding a motorcycle or sprinting like a track star.

“I still do this for Pimp and Fat Pat, free Twisted Black, and I’m still here, in a white Wraith looking like veneers, cheers, I used to shop at Sears, now I appear in movies like Richard Gere. One million wasn’t enough I had to get 3. I tell ’em smoke something B, that’s for Pimp C, I’m an underground king like Bun B, 25 choppers if you jump me.”

“The Wraith paid off, the Bentley truck next, you ain’t nothing man you know we rep Tex. Man this is H-Town, the real H-Town, if rap don’t work we got bricks on the Greyhound. 25 lighters on my dresser, yessir, you ain’t smoking gas like a Tesla. This a freestyle dog I ain’t write this. If you gon pimp dog, you better get a white chick.” (The real H-Town line was my favorite of the song but I couldn’t pass up the Sears/Richard Gere line as the title of this post just because of how ridiculous it is).

I love the look on Bay Bay’s face when Flip says ‘Shoot you and then give it to Bay Bay now that’s a flea flicker’ he looks like he’s excited but then he’s like ‘Oh wait a minute I don’t want to be holding this’ lmao. “Wooooo!”

I also like all the Texas/Houston pride here from the shoutouts to departed Texas legends like Pimp C and Fat Pat and imprisoned ones like Twisted Black, to naming restaurants like Ojos Locos and local streets in Dallas plus of course about a half dozen Houston and Dallas strip clubs, of course. The Houston Rockets t shirt is sick too.

I love all these OG’s in the game dropping stuff lately to show that they’re still a force to be reckoned with. The mix of Flip’s great voice and clever punch lines mixed with his high level of Texas/Houston pride and local references makes this a dope and memorable addition to the canon.

There’s something about this DJ Screw remix that just reminds me of spring and simpler times, so I wanted to post this today. Something about this gem just makes me think of spring time, March Madness NBA playoffs, Easter, Shamrock Shakes from McDonald’s and riding around town in an old school in the nice weather. I have the vaguest memories of linking this up with one of those tape adapters that allowed you to play your Ipod in old cars and bumping this on a nice March or April day in my first car, a baby blue 1987 Cadillac Deville. Does life get any better than that?

In essence, the song is a remake of a remake, since its Screw working his magic and putting his own touch on ‘Scandalous’ a 1995 song by The Click, a group most prominently featuring E-40. Scandalous itself borrowed the beat and hook from Zapp’s ‘Computer Love’. Somehow, slowed down and ‘chopped and screwed’ by ‘The Originator’ himself, the remake takes on a totally different vibe and a life of its own. With all due respect to The Click Screw’s version outgrew the original and became a classic. There’s something about the way he slows down the way Roger Troutman sings ‘Scandalous’ in the chorus and accentuates the ‘electronic’ or ‘robotic’ quality of it that just makes it so memorable and emphatic that it has always stayed in my mind 10 years later long after the first time I heard it.

I also love the ‘I keep a chopper ’cause I’m tryna get paid, gotta shake these city slickers out of my way’ line. Whoever made the collage for this song on Youtube did a great job of making a touching tribute to Screw. Gotta love the White Sox jersey he’s wearing in it and the Chicago Bulls windbreaker; so 90s!

Screw was a genius in the truest sense of the word, and the fact that this loose track he threw together so many years ago has stayed in my mind so many years after I initially heard it speaks volumes about his impact and how far ahead of his time he was. It also shows how wide-reaching and expansive his expertise was – in the early/mid 90s you didn’t have the luxury of just jumping on the internet and having any music you wanted instantly accessible to you, which makes Screw’s selections of this (and other) songs to remix even more impressive and shows how remarkably resourceful he was. He was remixing everything from his own Screwed Up Click artists to E-40 and Tupac to Michael Jackson and Phil Collins long before the days of Pandora and Spotify.

While this burgeoning musical genius was taken away long before his time, he was so productive and dynamic of an artist that there are literally hundreds if not thousands of songs-worth of material that he lives on through and that fans can go through before they’ve heard everything in his expansive catalog.  RIP Screw!