Kodak Black released his seminal debut album Painting Picures last Friday, and for most rappers that would have been enough for one week, but for someone who casts as long of a shadow as Kodak, it’s unsurprising that there was also a short biopic style documentary produced by World Star Hip Hop that was released leading up to the album (I will be putting up a review of this album in the coming days, I need to listen to it a couple of more times and let it really sink in before I finish my review, as it is such an impactful album).  The recent and sobering news (also revealed at the end of Project Baby) that Kodak was again locked up in Florida right as his biopic and album were released was almost surreal since so much of his music has been about his trials and tribulations of going through the legal system, serving time in prison, and not just the personal struggles that have come along with this but also emerging from the setbacks stronger than ever, with his faith intact, and with a wealth of material to release. Thankfully, according to sources, this most recent run in with the law was just a violation of his probation or house arrest and he should be out free again in a few weeks.

Project Baby opens with the screen showing the word ‘enigma’ and the dictionary definition of the word, and it’s a pretty good way to describe the phenomenal, mysterious and XYZ artist from Pompano Beach. It then plays a clip from his ‘Ambition’ video from when he was about 14 years old, which seems like a lifetime ago now to me, as I’m sure it does to him as since then he has literally become a pop culture sensation, a local folk hero, has released several huge songs and popular mixtapes, and also been ensared in near constant trouble with the law. This younger Kodak has a higher-pitched voice but it’s still the same unmistakable unique voice, no gold teeth, no dreads, no face tattoos yet, and he’s almost alarmingly skinny, almost unrecognizable from his image nowadays aside from his charisma and stage presence which is somehow still instantly recognizable. The film next shows a couple of his old friends and contacts from the neighborhood he grew up in reflecting on early memories of his talent, before showing Kodak in his new home right on a golf course in a more exclusive part of Florida, happily swimming in is backyard pool and reminiscing about the past.

Then, in one of the most interesting parts of the film, we get a firsthand tour of the Golden Acres Projects that Kodak grew up in (supposedly the last public housing project standing in Broward County) from one of the people who knows him best, his older brother John Wick. From a distance the project looks almost pleasant because of its bright colors, the trees, and the near-tropical environment but upon walking around with Wicks and hearing his guided tour, it becomes all too clear that the bright colors and nice flora are a facade, it is a place of desperation, crushing poverty, little resources, and frequent violence. “For a kid growing up here, you’re going to get beat up, you’re going to learn how to sell drugs, you’re going to learn how it feels to lose somebody you love, it’s a lot of ups and downs out here, but it’s miracles too,” reflects Wicks, and I couldn’t help but feel like this was literally the perfect description for Kodak’s music and life story. Often the strongest and most determined spirits are forged in the heat of crucibles like these.

Another interesting look into the pysche of Kodak is when he talks about his mom being violently robbed for her tax money when he was younger and how this made him really delve furhter into a life of crime. ‘We already ain’t really have it like that…’ he says and then trails off, amazed that they had so little but people still wanted to take it from them. You can tell that the event has had a lasting impact on him. 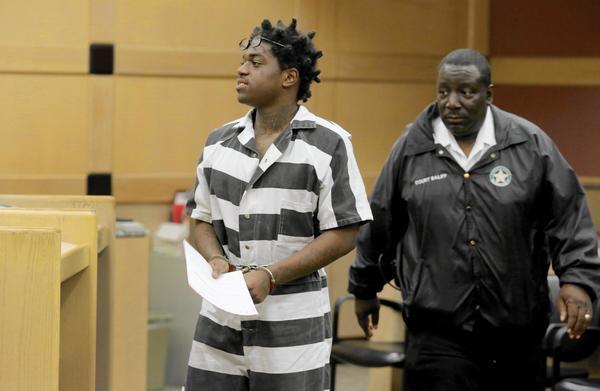 We are introduced to an interesting guy called Phatboy, who is introduced as simply and perhaps mysteriously just as Kodak’s ‘business partner,’ who talks about how the music isn’t the challenging part; the challenging part is his situation with the law and “the mistakes he made as a teenager carrying over to his adult life.” He points out that this has simultaneously been a scary situation, but also a blessing, since the young artist has been able to do little else besides write and make music while on house arrest, which is reminiscent of guys like Gucci Mane and Lil Boosie coming out of their time behind bars with a ridiculous amount of new material for their fans. One other interesting observation gleaned from this documentary since it was mentioned 2-3 times in different ways is that it’s interesting that Kodak seems troubled by the fact that both fans and enemies alike seem to stereotype him or notice/recognize him for his appearance (i.e. his gold teeth, dreads etc) than for his intellect or for his craft etc.

The documentary has a couple of other scenes like Kodak working in the studio with Future, Kodak speculating on what it would be like to meet his father one day and on what he sees the future holding for him, and some more observations from Phatboy, John Wicks, and some friends, before a memorable ‘epilogue’ of sorts with Kodak speaking from behind bars; it’s an interesting and very raw and honest rant so I’ll let you watch it for yourself without saying too much about it but my favorite quote from it was. “I use these roadblocks as stepping stones to come out strong, and who said it was going to be easy anyways?”Another powerful quote was when he says “I’m inclined to remind the youth not to let where you from dictate where you going. I feel compelled to re-shape the Haitian culture and bring back a positive angle… I want to humbly thank God for this vision.” He also seems almost painfully grateful and thankful to his fans, perhaps missing them now even more that he is isolated behind bars; a stark difference to receiving constant adoration from them. All in all, while it may seem contradictory since he is a larger than life character with a bold image, he still comes off as being a very humble and grateful star.

This was a pretty good documentary, really my only two constructive criticisms about it would be that it was too short (clocking in at 24 minutes but with a bit of filler with studio time and some clips from music videos etc) and left you wanting more, and secondly, and relatedly, that I felt like they could have delved deeper into some of the stories or went into more detail, but instead glossed over them. For example, I would have liked to hear more from Phatboy and learn more about who he is, and more from John Wick about growing up with Kodak etc. Overall, if you are a fan of Kodak Black, I think you will get something out of this documentary and learn more about the experiences and environment that were formative to his emergence into who he is today; you feel like you get to know Dieuson Octave a little better but he still remains enigmatic which ultimately is part of what makes him a compelling figure and artist.