The Martorialist, perhaps the chief purveyor of Kansas City’s underappreciated rap scene, got me on a Rich the Factor binge with his recent post on ‘Aristocrat‘ and I’ve been avidly surfing in this Kansas City whale’s wake ever since, delving into his previous work. My favorite song by him thus far is ‘1000’ on his last mixtape, appropriately also entitled ‘1000’. Over a really simple but enjoyable beat, Rich takes us back to the 90s with a flow and bars that seem like they could be preserved in time from the golden era of mafioso rap, and does it exceedingly well. There just aren’t too many guys that rap like this anymore. I also love his laid back flow and voice which makes it sound like he’s such a boss that he’s never had to rush himself for anyone in his entire life. Some great bars in this one from the aristocrat himself..

“We gonna eat with our hands or a fat plate, and I’m good in the jungle like a black ape”

Rich is always on the lookout for snakes in the grass and cuts them down quick, I’m just picturing him riding around a lavish suburban lawn at 5 MPH on a pimped-out looking John Deere…

“Backstabber and a rat and the back door, I’m the Midwest whale on a lawnmower. Grass cut got it looking like it’s Arrowhead, it’s a cannon you can tell by the barrelhead.”

Rich takes the unlikely whale/lawnmower combination to the next level by not only rapping about them but also coming up with these dope whale/lawnmower t-shirts. I see these teenage rappers out here rocking these tight designer shirts where you’re not even sure if it’s for a man or a woman, but give me one of Rich’s whale t shirts, a pair of sweatpants and some clean white Air Force 1’s over that nonsense any day of the week and I’ll be a happy camper. You’ve got to respect a man who just embodies a brand and goes for it all out. 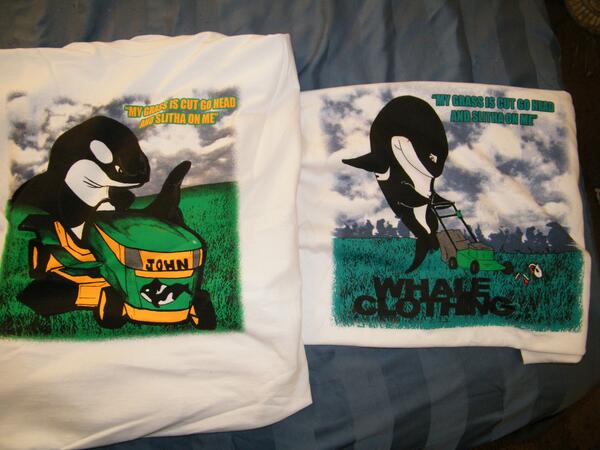 You’ve also got to love the KC-specific Arrowhead reference. With the Chiefs at 2-0, is it unreasonable for this blogger to dream of Andy Reid charging out of the tunnel (actually can Andy Reid really charge anywhere?), looking like the Kool Aid Man in his red short-sleeved windbreaker, leading  the boys out onto the field to this top-notch mob music in the AFC championship game? Then after the big win Kareem Hunt and Eric Berry dump the Gatorade out on Andy Reid to celebrate as ‘Aristocrat’ comes on over the Jumbotron speakers, but instead of Gatorade, it’s Whale Water. A newly minted fan of older Kansas City rappers can dream, can’t he?